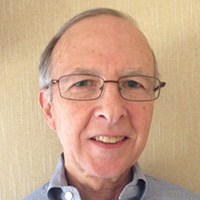 Stephen Wilson is a Connecticut photographer who creates fine art prints of water reflections. His interest in photography goes back to childhood, but it wasn?t until he retired from an investment career that he had the time and energy to pursue this interest more seriously.Steve discovered that, for him, it was more interesting to photograph the reflections of trees on a pond or stream than the trees themselves. He found that as a reflection moves across the water?s surface, the camera?s ability to freeze a moment in time creates unique and beautiful imagery which is ordinarily not visible to the human eye. The more he experimented with the concept, the more intrigued he became with its possibilities. With an almost unlimited variety of subject matter, the images have a wide range of shape, pattern, and color. Sometimes representational, sometimes not, they are often distorted by the water?s movement. They appear to be more the product of a painter?s brush than a photographer?s camera, as the water becomes the canvas and the reflection the paint.Steve’s reflection photographs have been exhibited in numerous juried art and photography shows over the past several years. He also enjoys presenting his work each summer in outdoor art shows in Connecticut, Massachusetts and New York. He is a member of the Canton Artists? Guild, the oldest continuously running guild of artists in Connecticut, and an Elected Member of the West Hartford (CT) Art League and the Mystic (CT) Arts Center.