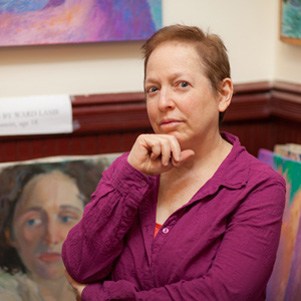 Robin Epstein has always been that rare kind of urban person, one who understands the imaginative possibilities of nature. ?She was born in Brooklyn as a third generation Brooklynite, and she grew up in Brownsville, Kensington, Sheepshead Bay, and finally Canarsie.She first experienced nature at the age of one, while staying in a bungalow colony in the Sullivan County Catskills. There she saw trees in groups not planted one by one streams, and fields of grass. As an art student at SUNY Stony Brook in the 1970s, Robin learned open-air acrylic painting in the woods of Long Island, New York, where she studied drawing and painting and became fascinated by the visual and spiritual nature of trees, which have been a motif throughout her painting career. At Stony Brook, she was known for her unusual interpretation of color in the natural world. From 1975 to 1981, Robin studied drawing with artist Fay Spahn. Through their work together, Robin greatly expanded her technical skills with pencil and other mediums and began experimenting with the interpretation of objects in space. She went on to apply these techniques to the subject matter that interested her nature and particularly trees. From 1977 to 1980, Robin painted daily in the Brooklyn Botanical Garden, usually in the mornings, while also writing and performing plays. Many years later, Robin’s partner–a transplanted Californian–took her to see the redwoods, first at Big Sur and then in Mendocino County, where she now devotes several weeks a year to drawing in the redwood forests and cypress groves. Her favorite place for open-air drawing is the Mendocino County State Parks in California, including the second-growth redwood forests of Van Damme and Russian Gulch canyons, and the first-growth redwood forest of Montgomery Woods. Robin has practiced open-air painting from the boardwalks of Coney Island to the ginkgo trees of the East Village, from Vermont to the California.