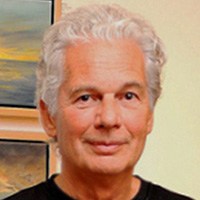 Peter Laughton, educated in Europe and the United States (BA, MA), has been involved in Fine Art and Design for the last thirty-three years. Ever since his first mixed media painting in 1978, he has been experimenting with many different, non-traditional approaches. The excitement of mixed media has allowed the most flexibility and range of expression. However, oil painting has often been the more challenging and the most satisfying medium. By incorporating some lessons learned from each medium, his approach has always been experimental as he develops different techniques to get the effects he wants. In his current work, he wishes to solicit an emotional response to images drawn from his own imagination incessantly inspired by the world around him.Peter’s award winning artwork is in private collections worldwide and has been shown in galleries in Massachusetts and Florida. He has also been involved in Fine Art and Photography for at least the last thirty-five years. Although primarily a fine artist, photography has always been another creative outlet allowing him to capture scenes, people and objects in a way that he would never paint. His paintings are drawn from his imagination whereas his photographs are a reflection of the reality around him. His photographs have won both national and international awards.