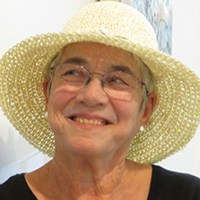 Marilyn Banner creates paintings in encaustic, a mixture of beeswax, pigment, and resin. Her current work focuses on her own personal vision of the natural world. Influenced by the early 20th century masters Ryder, Dove, O’Keefe, Tobey, and Burchfield, and by the expressive brushwork of painters such as Soutine and Guston, she has developed an individual style more concerned with the abstract qualities of line, shape, color, and texture than with traditional representation. Inspired by the philosophy of abstract expressionism, i.e., the importance of the inner,? and increasingly grounded in the natural world, her work combines a joyful spontaneity, reflection, and a deep responsiveness to nature.Marilyn Banner holds a BFA in painting from Washington University in St Louis and a Master’s degree from Massachusetts College of Art in Boston. Her works have been exhibited in more than thirty solo and over one hundred group shows, and are in numerous public and private collections.Among her solo shows were exhibitions at McLean Project for the Arts, Marymount University, Ceres Gallery, NYC, Carroll Community College, Loyola College Baltimore, DCAC and Gallery 10 in Washington DC, Shepherd College, Delaplaine Arts Center, and the Embassies of Costa Rica and the Czech Republic. Ms. Banner is the recipient of ten residency fellowships at the Virginia Center for the Creative Arts, and in 2012 was awarded a Mid Atlantic Arts Foundation VCCA Creative Fellows Grant. She was chosen as one of ten participants in Art Cart 2013, honoring lifelong artists of note in the DC area. Her work is featured in Encaustic Art in the 21st Century, by Ashley Rooney.Gallery Representation is through Ceres Gallery, NYC.