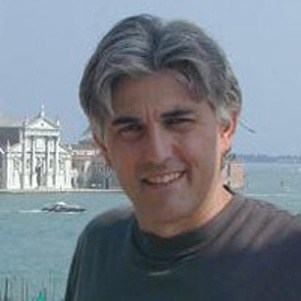 John Varriano, a native New Yorker born into a family of artisans and builders, was taught to work with tools and materials at a very young age. This allowed his ease with sculpting, freeform cement design, and direct application oil painting to flourish. From the time he was a child, John?s passion was the fine arts. After graduating from the High School of Art and Design, he acquired a Degree in Engineering Technology and pursued a career in architecture and design. He worked for years as an architectural draftsman and builder, until he made a commitment to his art in his late 20s. John experimented for a few years with abstract expressionism and sculpture. His attraction to human form and nature and his need to express figuratively and expressionistically, led him on his journey to discover and develop the rudiments of his current style. Driven by his interest in NYC, John was propelled to create on the streets where crowds of people, many future patrons, surrounded him while he painted. He became a known figure on the Upper East Side and Central Park. John has shown his work in galleries and other venues throughout New York City, Palm Beach and Philadelphia, including one man shows in 2001, 2003 and most recently in June 2009. He is presently featured in the Acento Gallery in Abu Dhabi. John had the honor of being the juror for The Art Guild?s Gallery at Elderfields and The National Arts League juried competitions and exhibitions. He has also created illustrations for Bartender magazine and several other corporate publications. John has also given back to the city that has given him his inspiration. Pieces of his artistry have been donated to raise money for The Police and Firemen?s Widow?s and Children?s Fund, RiverKeeper, The UJA Foundation, The Community Spirit Award, benefiting the West Side YMCA, and the Seaman?s Church. John has had the pleasure of completing large commissions of the New York Stock Exchange and the landmark restaurant, The Four Seasons. On January 30th 2009, John was featured in an article in the New York Times. He is the second artist in history to have one of his paintings on the front page (Jasper Johns was the first). He has also been featured in segments on Globo Television; the largest Portuguese station in the world and WNBC, which also ran in NYC taxis. John has recently completed portraits of various people affiliated with The Four Season?s bar and restaurant. They were exhibited in the restaurant?s lobby, which complimented the restaurant?s 50th anniversary. In April 2010, John was honored to lecture at the prestigious National Arts Club about his life and influences as an artist and is looking forward to giving a series of lectures in the near future.