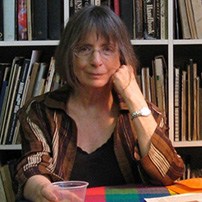 Elinore is a contemporary representational painter who uses real scenes to evoke and celebrate the complexities of disconnectedness and emptiness in a world of global connectedness and a desire for transcendence in a secular world. Reflections, and motion when caught with a camera, create transparencies and multiple layers that become the building blocks from which Elinore’s paintings are constructed. The layers are woven together, creating patterns that become ways of seeing the immediate world in front of us, behind us, and multiple views in between. The reflected reality is often visually indistinguishable from the physical reality, the two blending together in a flattened and collage-like way. Elinore works in a studio in Long Island City, Queens, New York, and in January 2014, she unveiled a triptych mural of the interior of Grand Central Terminal, for the lobby of 4540 Center Blvd, a residential tower in Long Island City, Queens, New York. Her most recent solo show was at the H. Pelham Curtis Gallery at the New Canaan Library in New Canaan, Connecticut in 2014; in 2011 she was one of four artists representing the United States in Nordart 2011 at Kunstwerk Carlshutte, Budelsdorf, Germany. Previous solo exhibitions were at the Atlanta Art Gallery in Atlanta, Georgia, Capricorn Galleries in Bethesda, Maryland, and the DFN Gallery in New York City, to name a few. Elinore is the 1986 recipient of the Thomas B. Clarke Award for figurative painting at the National Academy of Design (now, National Academy Museum) in New York and the Second Place Award at the Butler Institute of American Art Midyear in 2002. She also received an NEA Grant and a NYFA fellowship during these years. Her paintings are in museum collections including the Cleveland Museum of Art and the Smithsonian American Art Museum in Washington, D.C., the Museum of the City of New York, and the Museum of Fine Arts in St. Petersburg, Florida, to name a few, and she has paintings in more than 50 corporate collections, such as McKinsey and Co. and Pfizer Inc., and hundreds of private collections in this country and abroad. Elinore Schnurr continues to explore life and art through figurative paintings.