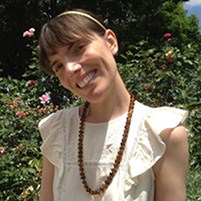 From traditional printmaking to full scale installation, Angela Victor’s medium is just as diverse as its subject matter; environmental awareness and gender identity. A Philadelphia native, Angela Victor graduated from Moore College of Art and Design with a BFA in two-dimensional fine arts. She furthered her studies at Tyler School of Art and Fleisher Art Memorial.
During her undergraduate education she had an instant connection with printmaking. It was here that she found the ability to express fragility with paper and ink. Angela’s transformation into an installation artist progressed during the three years she spent as a member of the Highwire Gallery Cooperative. By discovering full scale installation she developed a visual language that created environments in which the viewer becomes part of her world.
Her current work offers a strong return to her printmaking roots. Through the theme of women’s work she has developed a body of prints that is inspired by textile elements, such as pattern, repetition and quilting. Still at its core, Victor utilizes a mixed media technique that is highly enhanced by texture and layering, which has become her trademark approach.